In its early development, this land was nothing more than a crossroads of piney woods and a new track of rail. By the 1890s, settlers were steadily arriving from the Carolinas and in 1897, a settlement was established here at Gretna.

The town was platted in 1905 and in 1908, the land for the school was deeded to the School Board by the Humphrey & Mahaffey Families. This building would serve to teach through Junior High grades until 1935.

Group of students and principal pose for a photo on the school house c. 190?

It has since been used as a clinic, community center, Shriner’s Club, and church hall.

This incredible image (top) from the 1950s or 60s depicts one of my favorite Old Southern towns, Rodney Mississippi. (Photographer Unknown)

The first building you see on the left is no longer standing and the brick building in the center of the image is being dismantled this week. The church at the far end of this picturesque scene still stands, and was surveyed this week by a structural engineer, but how much longer it will be there is anyones guess.

The ever-changing Mississippi River sits very close to this once-bustling town and its waters reek havoc on these old structures whenever flood levels are reached.

The incredible history of this town is kept alive by the efforts of a group who works to keep the buildings cleaned and through the tales of those who had the opportunity to live there. But sadly, Rodney is a special place with an uncertain future.

Built in Lake County Florida, this impressive  7,200 square-foot home was the result of William J. Howey’s hard work and vision, but today sits empty and entangled in an on-going legal struggle.

Mr. Howey was born in Illinois in 1876 and started his career selling insurance before trying his hand at various enterprises, including car manufacturing and pineapple farming. By the early 1900’s, he had made his way to Florida where he began his most successful endeavors in citrus and real estate development.

As a result of his success, Howey was able to build this Mediterranean style mansion in 1925, complete with a ballroom with handpainted 30 foot ceilings. The home was fit for entertaining high society, and to celebrate its completion, that is exactly what Howey did. 15,000 people would attend his free concert, hosted on his lawn, with the entire 100-artist New York Civic Opera Company  to perform. The 4,000 cars that delivered the attendants were parked on this very site.

Howey would live in his beloved home until 1938, when he passed away at the age of 62. His widow, Mary Grace, also lived here until her passing in 1981. They are both interred at the family mausoleum on site, along with their daughter Lois.

The home now sits in stable but concerning condition. It is presently wrapped up in legal woes that have prevented anyone from taking on the task of preserving the place appropriately. In the meantime, the house has a caretaker who has been work to protect the place for a few years now. You can follow the project on Facebook here.

If you would like to see interior photographs of this building, or to learn more about its story, please check out our friend Abandoned Florida’s post about the Howey Mansion.

[**This building is privately owned, not accessible to the public, and patrolled by local police**]

According to locals, Moody’s roadside BBQ stand was a favorite for years, both to travelers and neighbors alike. I haven’t been able to track down when it opened, or when they served their last plate of supper, but it certainly is well missed by those who frequented it.

Built around 1904, the mayor of a nearby town lived in this home, which was formerly situated within the city limits.

A relative of the original family has purchased and relocated it to this beautiful location with plans of restoring her.

Once called the Green General Store, this building was located in a nearby town in Columbia County, then moved to this spot by Nelson Croft in the 1950’s. It was then used to store tobacco and is presently used by its owners for storage as well.

This haint colored shack has always been a favorite of mine, despite its desparate need for some new paint. This color is popular throughout the South, but has a storied past that many aren’t aware of.

Check out the history of the color (or range of colors) called ‘Haint’ blue!

Through Good Times and Bad

Built some time in the 1800’s, this home grew along with the people it sheltered, as its family nurtured a small community outside these walls. Born in 1821 in North Carolina, James Pope would marry Mary Elizabeth Sheperd in 1843. They would have twins, James and Anne in Georgia just before finally relocating to Pike County, AL in the 1850’s as some of the earliest white settlers to this area. These pioneering families would’ve been met with a variety of challenges and life on the frontier must’ve been more difficult than any of us could imagine now. This family’s experience was no different and tragically, the twins would pass away in a cabin fire sometime shortly after the family settled in Alabama.

James and Mary would have at least 5 other children that they would raise in this home. Their sons George and Charles would continue the pioneer tradition that their parents had laid for them as they worked to create a small but self-sustaining community for themselves. George in particular is remembered as an important founder in this area. His skills as a blacksmith were only met with his talents as a large animal veterinarian. He traded horses and agricultural products with locals and travelers, he concocted itch creams to aid his fellow community members, all while raising seven children in this home with his wife Martha Cope. Years later, the couples only daughter, Eula, would continue to live in this home and was known for her gracious hospitality and home cooking- which she shared often as this home frequently served as a voting precinct and community center.

Undeniably, Mr. Pope must’ve been an invaluable member of this small rural community during a time when you had to rely on your neighbors, however few they may number. In a place where the nearest transport lines were an 11 mile trek away. These pioneer families had to be cut from a certain kind of cloth to be able to survive in the face of the challenges they faced daily.

As I approached the sleepy crossroads where this home sits, I paused for a moment to make sure what I wasn’t seeing things. The buildings were so perfectly set against a beautifully crisp blue Alabama sky. The surrounding fields were astir as tractors re-tilled the freshly harvested land. A passer by stopped to ask if I knew where Wiley’s BBQ was. Could this be a dream?

For a few moments that day, I felt happily stationed in a snapshot from the past. I lost myself for a moment imagining that George’s view as he gazed across his fields might’ve been similar to the one I got that day.
[Bullock County, AL c. 1800’s]

This quaint cabin has dual entrances for guests who were traveling through the area, or visiting the nearby fishing camp. Thanks to local, Shannon Lee Burns, for help with identification, background, and vintage image of this historic property:

“The several small cottages were built in the mid-1920s on a fish camp for Lake Magnolia. In the 30’s several small houses from nearby were added to the complex. This was one of the first motels for the burgeoning auto oriented Florida tourist trade and it included a communal bath house and a restaurant. I believe six of the cottages still exist.” 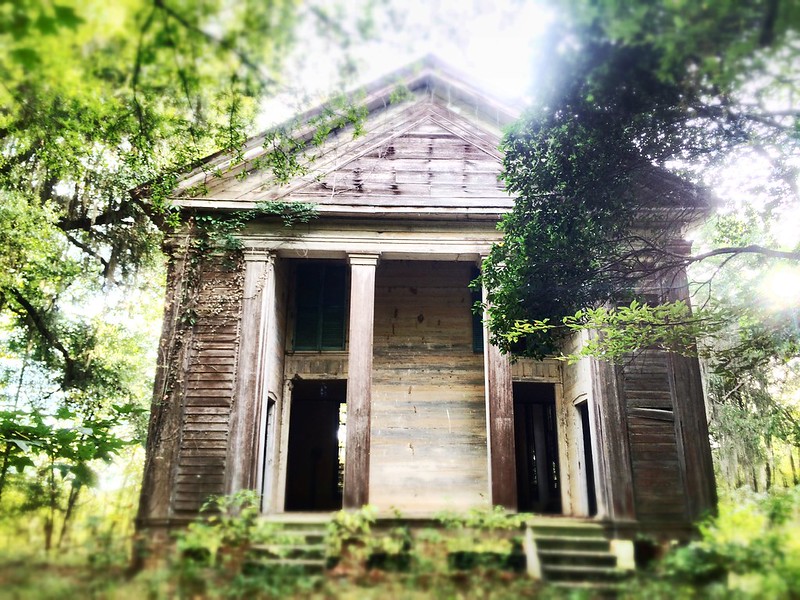 Deep in rural Alabama sits this incredible structure, like a dog-eared page reminding us of a very old book. Built in the decade just before the Civil War, this Presbyterian Church was probably built by slaves from a nearby plantation. Imagine how much the world around this place would change in just a few short years and how different life would be for its congregation.

Notice the four separate entryways, required for men, women, and slaves to enter separately. The small doorways to the sides of the main doors leading up to the slave gallery, still in tact today, but inhabited only by a large and less than friendly owl. 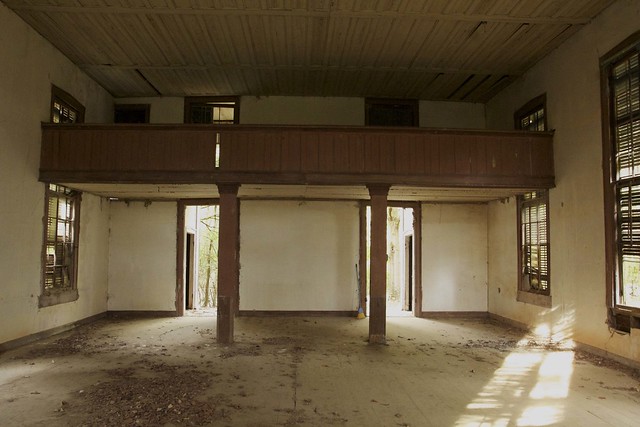 [View of the ‘Slave Gallery’ from the pulpit]

The Greek Revival style building is surrounded on both sides of this idyllic property by just over 30 graves, dating from 1843 to the most recent in 1955. Added to the National Register of Historic Places in 1986, it is now privately owned and being looked after as best as possible by its current owners who placed a new roof on the building in the past 5 years. The front doors have been stolen, along with some other wood, and fixtures, but the structure is largely void of vandalism or significant structural damage. 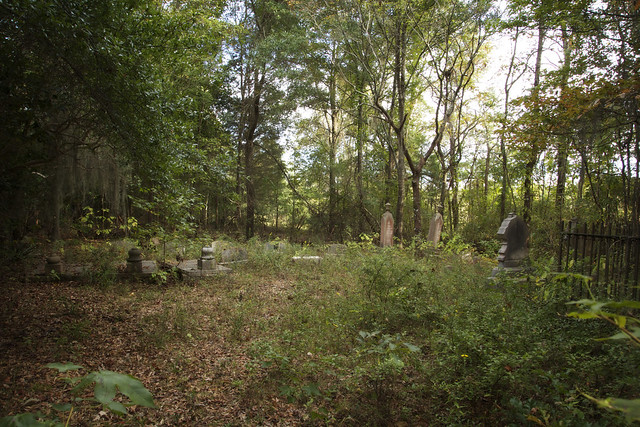 Standing in front of a place like this one, somewhere down a dirt road, and far from home, I still can muster up a connected feeling to the people who built it and lived their lives on this property. The woman who might’ve stood here in 1853 and myself, standing here 162 years later have very different lives, but it makes me smile to think that we both got to stand in awe of such an incredible structure. 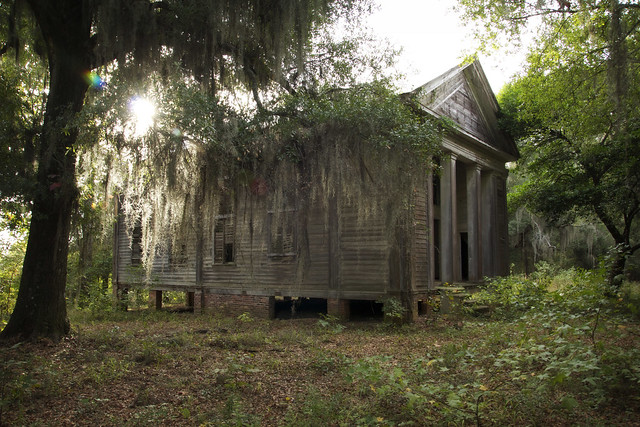 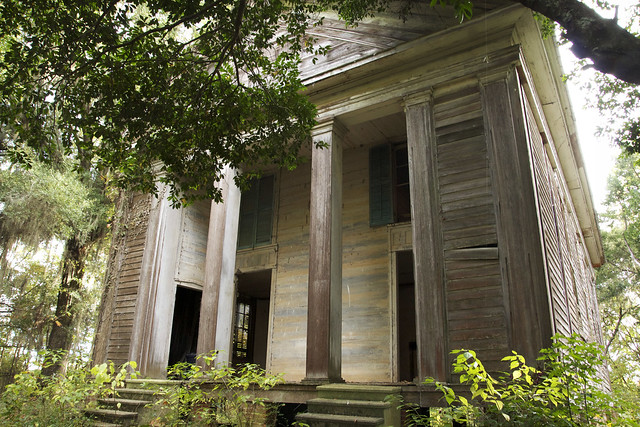